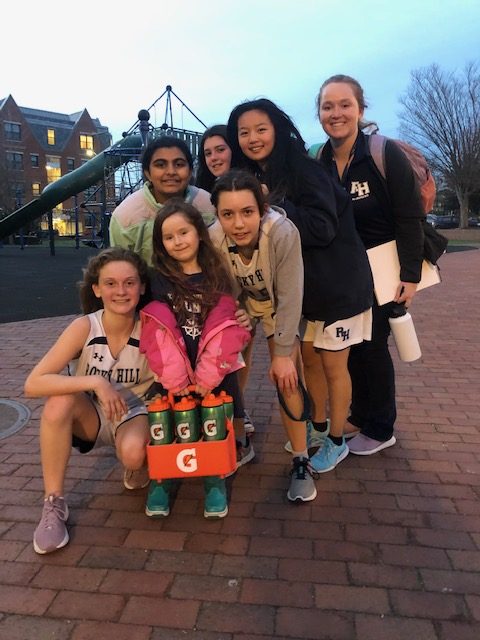 What a game from the RHCD Middle School girls in a game against Wheeler! Despite not having any subs, and having only 4 players for the second half, the Mariners hustled every minute of the game. The defense was led by Sabrina Chen (Warwick, RI), Lizzie Hill (South Kingstown, RI) and Sayuri Lakhkar (East Greenwich, RI). The Mariners out rebounded Wheeler and forced 13 turnovers! Katie O’Neil (Warwick, RI) started the Mariners with 2 deep shot baskets and Izzy Rishworth (North Kingstown, RI) took advantage of the picks and ran the baseline scoring 3 baskets. The score was RHCD with 10 and Wheeler with 13. 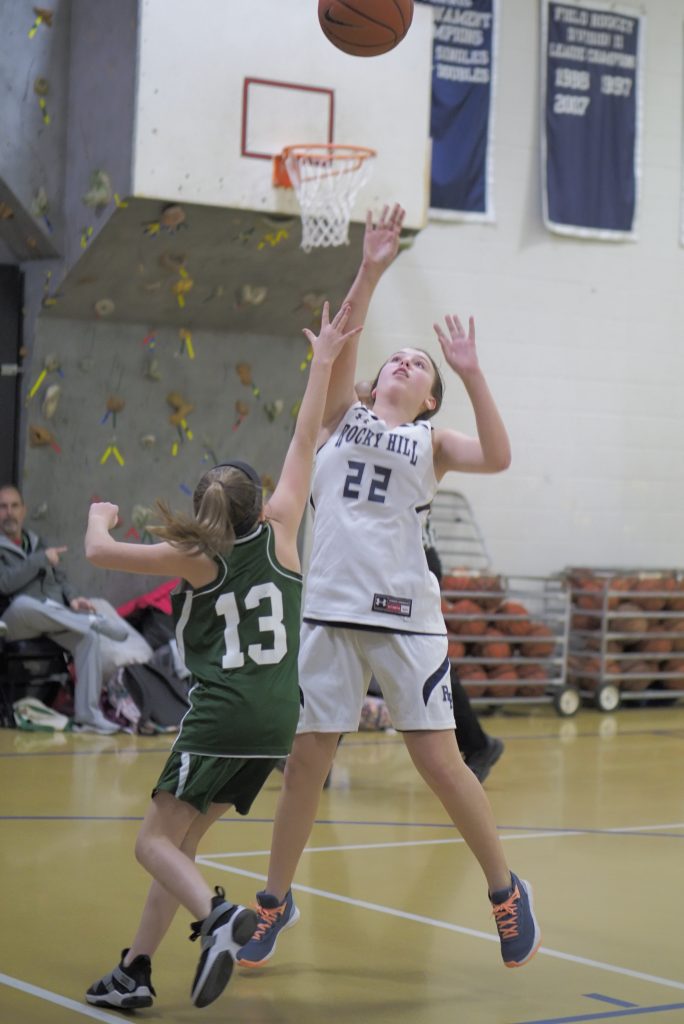 Pennfield was RHCD’s biggest match-up while battling illness and playing a team consisting of mostly 8th graders. Pennfield had experience and good shooters, but the Mariners hustled and played hustled throughout the whole game. Jillian Pogacar (East Greenwich, RI) had 2 points while playing point guard. The end score was 2-37. 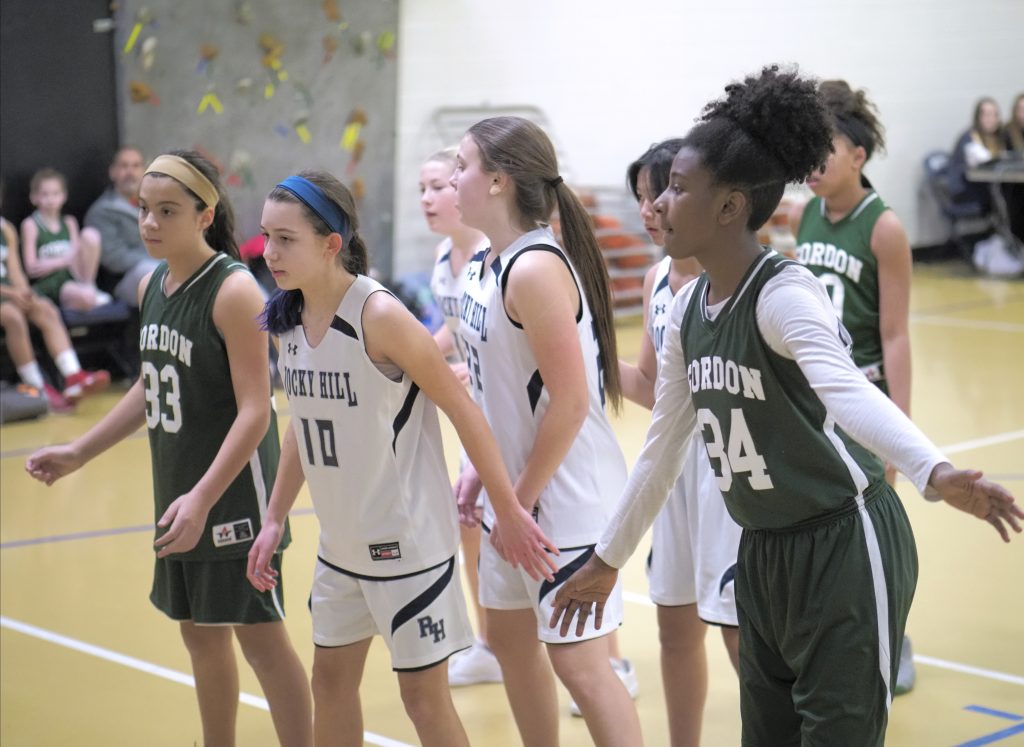 RHCD had their best game of the season against Gordon. They played a zone defense, and went into a successful press for the second half. RHCD girls took shots and drove to the basket better than any other game this season, drawing 9 fouls on Gordon. The defense by RHCD led by Sabrina Chen (Warwick, RI) and Lizzie Hill (South Kingstown, RI) kept Gordon to only 6 points. Jillian Pogacar (East Greenwich, RI) and August Moran (Wakefield, RI) both had 2 points each. It was a close game, but Gordon came out on top with a score of 4-6. 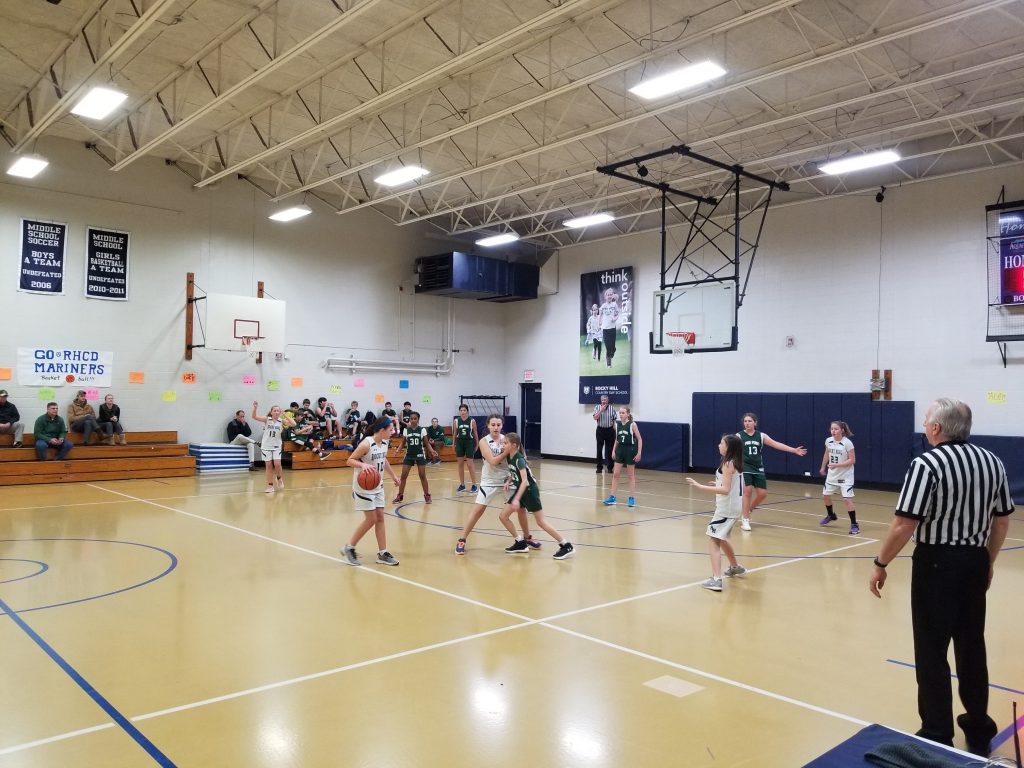 It was an extremely close game against Pine Point. RHCD Middle School girls fought extremely hard and hustled until the last minute. The girls played a tough man-to-man defense, switching to zone at half-time. Only down by 2 at the half, Pine Point was able to get past the The game ended in 4-12 with Pine Point coming out on top. Jillian Pogacar (East Greenwich, RI) had all 4 points. 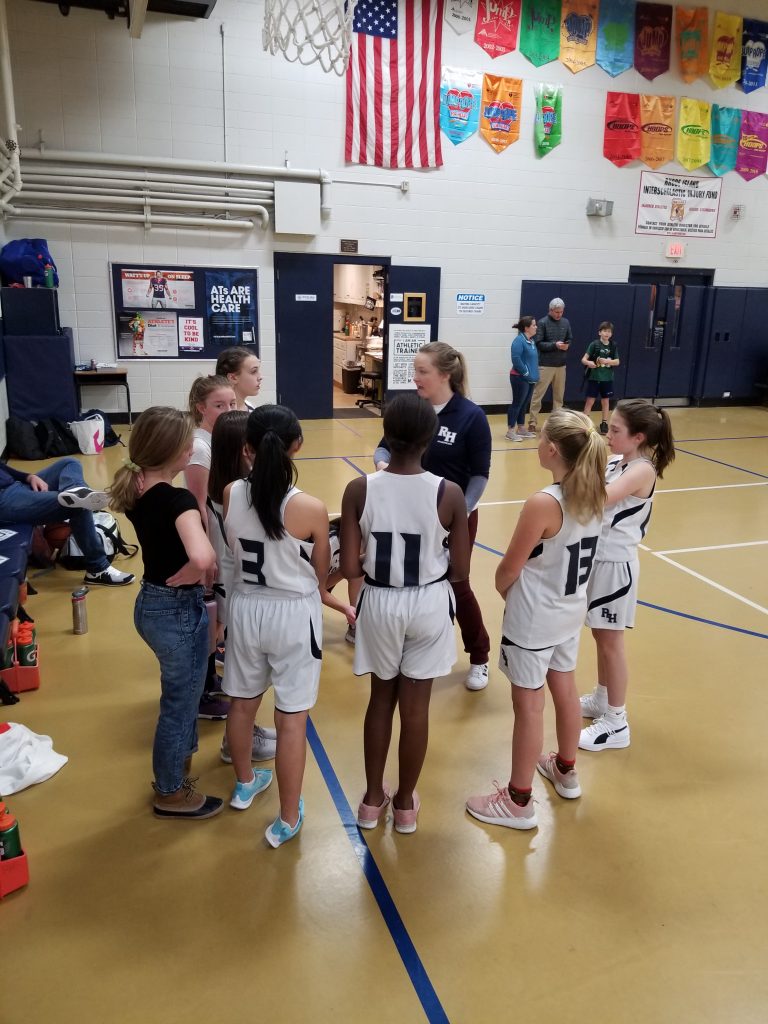 The MS Girls Basketball Team Learns a lot from The First Game of the Season!

RHCD middle school girls basketball played their first game of the season against BCA. First half Mariners did a zone defense for the first half and then switched to a man defense for the second half limiting their points to 16. 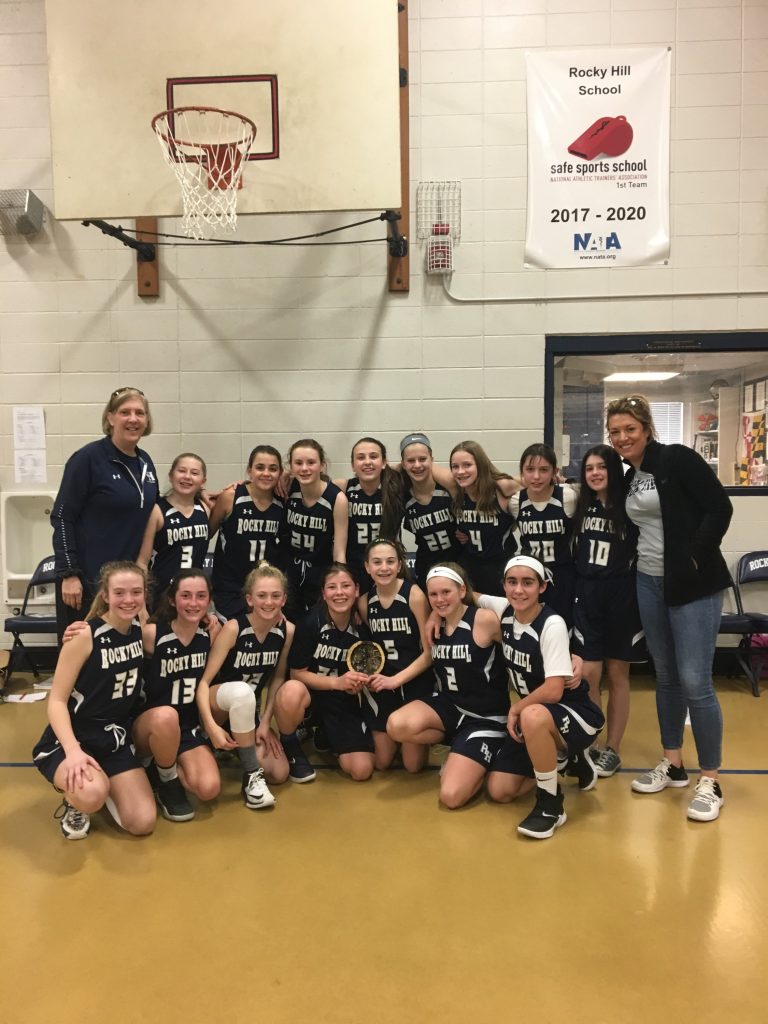 In the opening game, the girls played an exciting game to maintain the lead and beat Paul Cuffy with no time left on the clock. The defensive pressure and the well executed offense made this a total team victory. It was an exciting game, and allowed us to continue to play on Thursday. Which was one of our original team goals in the beginning of the season. Franny McCaughey, Katie Kerachsky, Skye Connell, and Tina Greim, all contributed 4 points each, and Sydney Boss and Lexi Cote finished out the scoring.

The team started strong and kept BVP within reach. However, as the games pace picked up, our players just ran out of energy. They played hard, but couldn’t maintain the fast pace transition game to stop them. Even switching to man-to-man, didn’t give us the boost we needed to win. The highlight of the game was when the 6th grade squad went in to play at the end. They played hard and showed us what to expect next season! The key scorers were Skye Connell and Katie Kerachsky each with 4 points, Lexi Cote with 3 points and the other scorers were: Franny McCaughey and Tina Greim.

The girls started on a slow, non-energetic note in the first half and were down (5-10) at halftime. However, with the exciting shooting of Kristina Greim, Skye O’Connell and Franny McCaughey each contributing 6 points and the leadership of Katie Kerachsky, the team’s energy doubled! During the press and the defensive pressure of Franny McCaughey, Hannah Boss and Sydney Boss, Pennfield never had a chance. The real energy came from the 6th grade players who were amazing on the bench. They consistently cheered and pumped everyone up! This was a true total team victory!

The whole team did a great job being strong and not becoming frustrated. There was a definite size difference between the two teams, but we went out and played tough and strong. Tina Greim played a wonderful game offensively. Skye Connell had her best game of the season both offensively and defensively. The eighth graders led us the team, but the sixth graders showed their strength by jumping into the game and playing tough. The team was very proud of how they played this game as they should be. Great work! 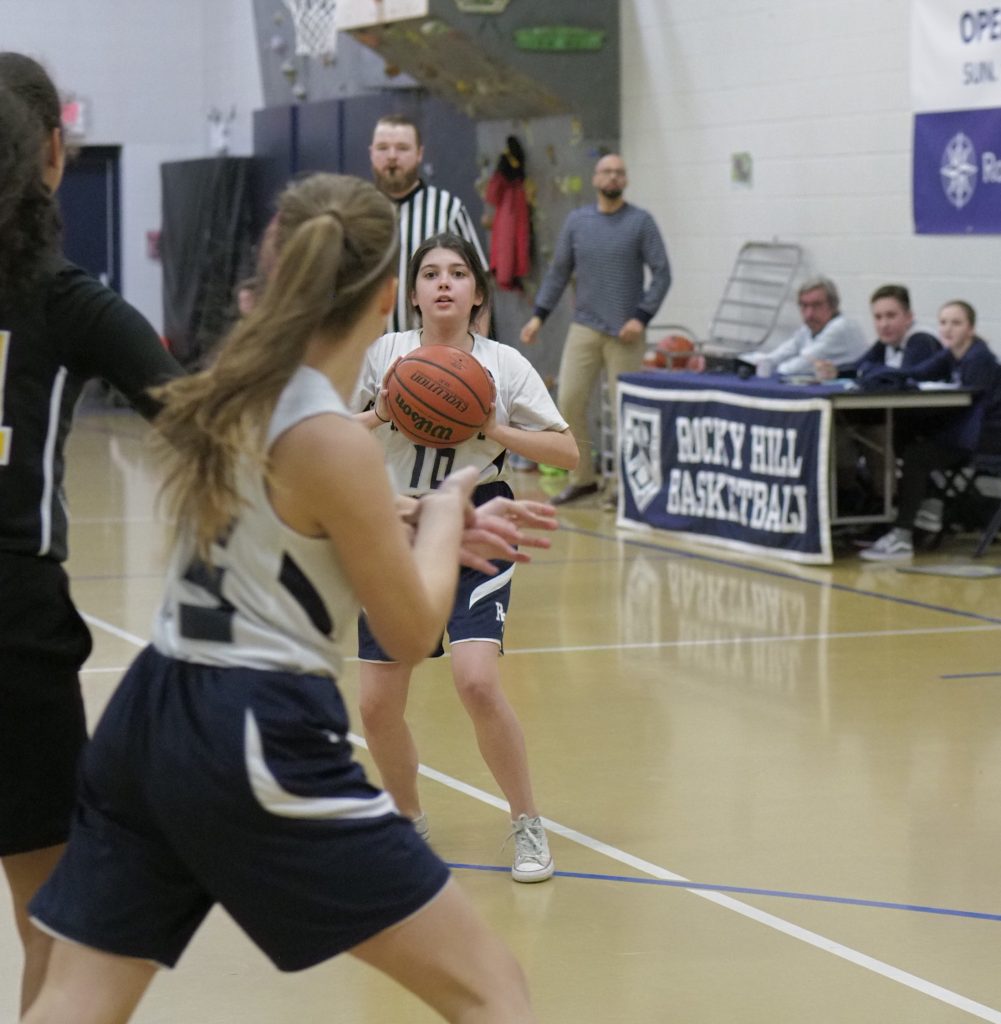 Skye O’Connell had six points! She really has been a strong player under the hoop. Our 8th graders did a great job leading the younger players who had significant playing time this game. Although Gordon was physically stronger we played with great strength and perseverance. For those that were afraid due to size they stepped up and played great defense!

Once again Lexi Cote dominated on defense, along with Sydney Boss. Tina Griem showed her focus on the line after a technical foul against Barrington. August Moran, Izzy Rishworth, Katie O’Neil and Abbey Grandin all showed great improvement on defense. This game was extremely physical, but we were tough – even with the close loss. I am very proud of these girls!

Next game is a Valenines day date with Gordon! 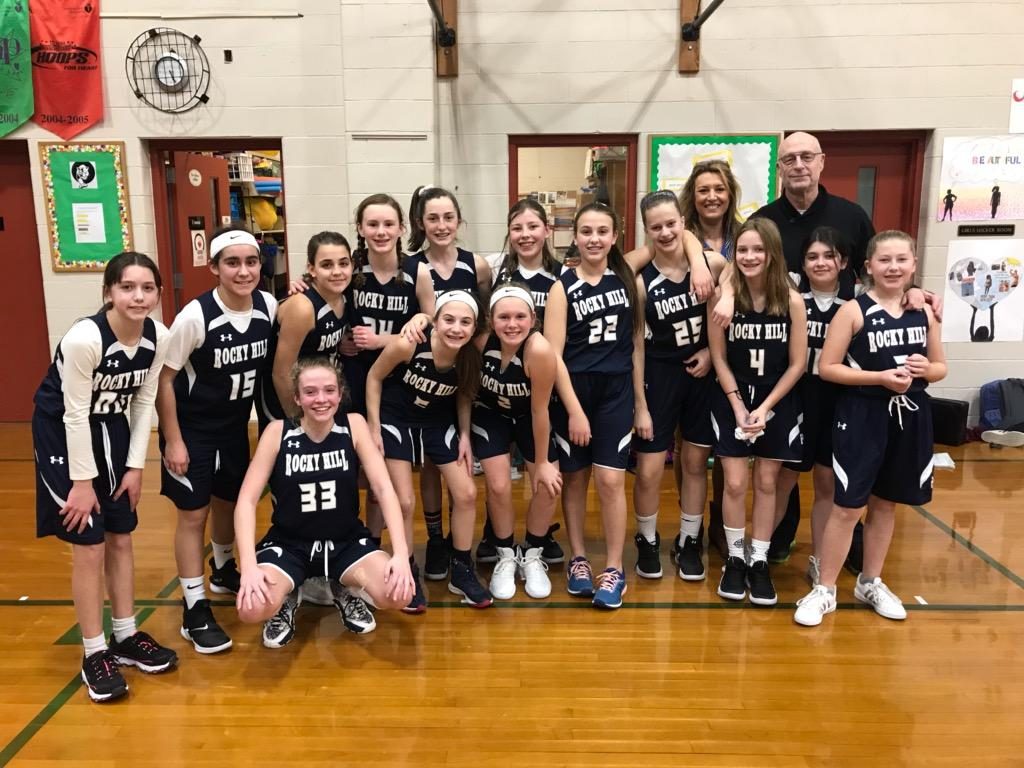 The third game of the season is a victory!

Lexi Cote & Skye Connell were dominate under the basket both offensively and defensively. Franny McCaughey, Katie Kerchasky and Sydney Boss did an amazing job helping led the team. Our 7th & 8th graders blended nicely together while running our offensive plays. Our 6th graders all had an impact on today’s win with playing time, and cheering! This is our first win of the season!!

Tomorrow we will be playing away at Barrington Christian Academy!