In The Little Prince, Antoine de Saint-Exupéry wrote that, in the end, “love is the process of my gently leading you back to yourself.”

While Saint-Exupéry didn’t have schools in mind, per se, I have always embraced his comment as my educational motto.

Our mission as educators is not to force students into a pre-determined, Procrustean uniformity.

Each child is a unique contribution to the universe, a sui generis being who has never appeared before and never shall again.

Education, then, is the process of gently leading each child to realize her or his unique quintessence and of nurturing that to the fullest possible actualization.

Education is an act of love.

I am delighted to share this exciting contribution to the cutting edge of education innovation announced this week by Rocky Hill School and LearnLaunch:

“From its start, LearnLaunch has been at the cutting edge of driving edtech innovation, and our partnership with Rocky Hill School furthers that goal,” explained Liam Pisano, LearnLaunch Managing Director and Partner. “By bringing the companies that are developing the latest education innovations directly into a school, we are creating a collaborative platform where entrepreneurs, educators, and students can work together to develop and test edtech in a real- world environment.”

Rocky Hill School is designing an Innovation Center on its campus where selected education technology companies that are part of LearnLaunch’s co-working space/accelerator cohort will test and develop new educational technology with students and faculty. This is an entirely new paradigm that will be unique in the nation: entrepreneurs developing educational products while embedded within a preschool to grade 12 test bed. Both organizations are excited to bring this new and innovative approach to developing educational innovation to Rhode Island.

“This exciting partnership will afford students and faculty at Rocky Hill School the opportunity, unique in the nation, to collaborate in creating and refining the next generation of digital classroom tools,” said Dr. James Tracy, Head of School at Rocky Hill School. “Our students will have the opportunity to intern directly with the visionary entrepreneurs who are creating the very breakthrough technologies that will shape our educational future.”

Rocky Hill School students and faculty will collaborate with the LearnLaunch team, intern with start-up companies on-site, and help shape the next generation of classroom innovation. The Innovation Center will also house artists and teachers-in-residence, and offer student enrichment opportunities focused on innovation, design thinking, and entrepreneurism. The Center is targeted to open in September 2017.

Rocky Hill School invites you to learn more about this path-breaking initiative
by visiting www.rockyhill.org/innovation or by visiting us at our Open House on Sunday, January 22nd from 1-3 PM.

LearnLaunch is dedicated to connecting, supporting, and investing in the education technology ecosystem to drive innovation and transform learning. They offer a vibrant community, educational events, a collaborative co-working space, and a selective accelerator program to promote the growth of the edtech sector. LearnLaunch is based in Boston, a world education hub. Learn more about LearnLaunch Accelerator, Campus, and Institute at www.learnlaunch.com and follow LearnLaunch on Twitter at @learnlaunch.

Founded in 1934, Rocky Hill School is an independent, day school for preschool through grade 12. Located on 84 acres along Narragansett Bay, Rocky Hill School provides a college- preparatory foundation and diverse opportunities for students to explore and pursue their intellectual, athletic, and artistic passions. Dr. James Tracy is Rocky Hill’s 10th Head of School.

As I write this, I sit looking across the beautiful Rocky Hill School campus to the deep cerulean waters that lap our shore.

This week, I had the pleasure to participate in the dedication ceremony for our new preschool playground. I walked with the little ones and their teachers from the preschool to the new installation, where many of the parents, teachers, and staff who had made the playground possible were awaiting them. 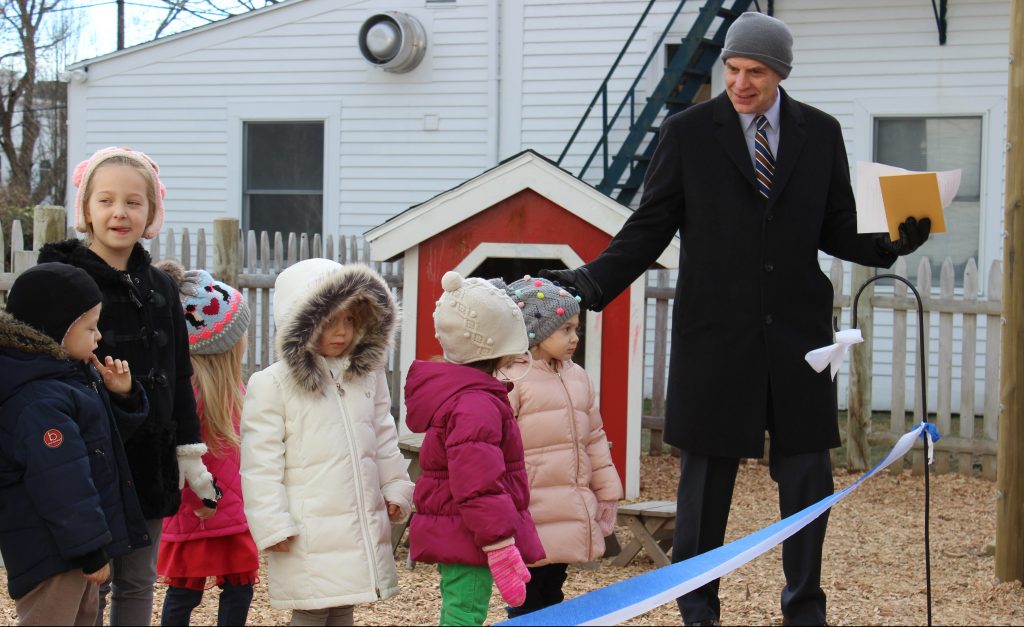 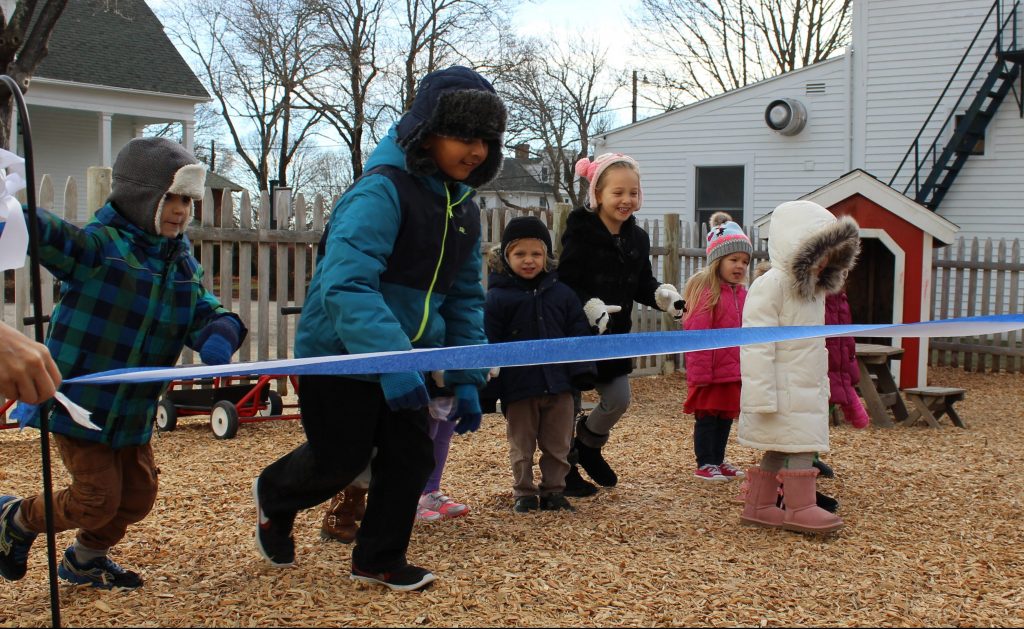 Upon seeing the adults standing there, one of the cherubim excitedly asked Ms. Lisa, “Why are there so many big kids here?”

Adorable, of course! But also proverbial wisdom from the mouth of babes.

Her exclamation set me to ruminating on the comment famously made by Isaac Newton:

“I do not know what I may appear to the world, but to myself I seem to have been only like a boy playing on the sea-shore, and diverting myself in now and then finding a smoother pebble or a prettier shell than ordinary, whilst the great ocean of truth lay all undiscovered before me.”

Our preschooler articulated a sagacious truth: At our best, we are never more than “big kids.” I say “at our best,” because the challenge, as adults, is to retain a child’s curiosity, openness to discovery, passion for finding smoother pebbles, and profound experience of the mysteriously awe-inspiring ocean that lies ever undiscovered before us. Our waterfront campus thus becomes not merely a bucolic setting and an experiential classroom, though it is certainly both of those, but also a metaphor for discovery and mindfulness of the sublime.

I find that Rocky Hill School teachers have the rare attribute of modeling these very qualities every day as educators. Put another way, and as I have often said, RHS faculty retain the original passion that led them in the first instance to become teachers, richly fostering in their students the passion for discovery and celebratory learning that is at the core of all true education, little and big kids exploring together on the shores of the unbounded.

There has been a welter of articles in recent months about the profound impact robotics and artificial intelligence (AI) will have on employment in the coming years. I have been reading extensively in the research behind these reports, and I am convinced that the conclusions are well founded. This is not a “news cycle fad”; the nature of work is on the cusp of changing in astonishing ways.

One helpful way to think about technological obsolescence is to envision a set of four quadrants in which the top left is comprised of highly skilled functions that are routine; the bottom left, unskilled or semi-skilled routine jobs; bottom right, lower-skilled non-routine work; and upper right, highly-skilled non-routine work.

For the past two centuries, throughout the industrial revolution, jobs in the bottom left have been the most vulnerable to replacement by machines. In textile manufacturing, steel production, agriculture, and many other industries, technology ranging from the steam engine and the McCormick reaper to Amazon’s roboticized order-fulfillment centers have for centuries replaced lower-skilled jobs whose routine nature rendered them vulnerable to machinery that was well-suited to repetitive performance.

At the dawn of the computer and robotics revolutions, most people thought that the bottom right quadrant would be the next to fall: lower-skilled non-routine jobs. Yet it didn’t turn out that way. As it happens, automation is less concerned with the skill set required for a job so much as the routine repetitiveness of a job. Even highly skilled routine jobs are easier to automate than the lowest-skilled non-routine task. In other words, it is easier to build software that analyzes financial data—high-skilled, routine work—than to walk about in an unfamiliar environment—a low-skilled, non-routine task that even a two-year-old human can do.

For employees, this means that the most immediate jobs and careers under threat of being rendered obsolete in our era are all those based on routine tasks in the left-hand quadrants, skilled or otherwise. I suspect, for instance, that pharmacists, who, despite their high degree of training, perform an essentially repetitive task, will soon be replaced by robots that don’t require seven years of education in pharmaceutical colleges, don’t expect benefits, and make fewer mistakes filling prescriptions. To take another example, even many of the more routine news stories you read today (such as the daily stock market reports) are written by journalistic bots.

Importantly, though, we are seeing tremendous progress on the non-routine side of our quadrants, which will prove even more disruptive over the next quarter century. Robots are getting much better at human-like conversational interaction, at translating colloquially from one language to another, and at driving cars in ever-shifting traffic conditions, to take but a few examples from just the past week’s news stories. Astonishingly, too, software bots are increasingly writing legal contracts or generating medical diagnoses. (IBM’s Watson, the Jeopardy champion, is now being dedicated to cancer diagnostics; Watson has already absorbed the content of 750,000 medical journal articles on cancer to prepare for the task.)

A 2013 Oxford University study concluded that 47 percent of American jobs will be eliminated in the next 20 years. Think about that. Half of all jobs gone in two decades. Always, in the past, new jobs have been created by technological innovation at a rate that has roughly kept pace with the number of jobs eliminated, ensuring that workers (with retraining) could find replacement work. Yet it is hard to imagine new job creation keeping up with today’s scale and rapidity of worker displacement.

What does all this mean for education in 2017? I would argue that we can no longer assume that we are preparing students to work in knowledge economy jobs that historically have been immune to automation. Even doctors and lawyers will increasingly be replaced by bots programmed with ever-deeper AI. (And remember: As long as Moore’s Law pertains, the chips running bots will get twice as powerful every 18 months at the same time they become 30 percent less expensive to make each year, while humans, evolving at an infinitesimally smaller pace, show no discernible increase in their cranial capacity every 18 months.) The displacement of even the most highly educated “professionals” is but a short time horizon away.

What, then, will remain uniquely human domains in the world of work? This is what Greg Toppo (National Education & Demographics Writer at USA Today and author of The Game Believes in You) and I are in the process of co-authoring a book about. [Click here to read an earlier conversation with Greg]. Yet I would venture preliminarily here that creativity, entrepreneurship, goal-setting and large-scale strategic decision-making will almost certainly remain exclusively within human purview for the foreseeable future. Also, areas pertaining to nurturance, caring, and deep social values are unlikely to be replaced by machines. (People in hospice care will want to hold another person’s hand, not a robot’s.) Also, humans will remain the strategic goal setters. (After all, only people can decide the purposes toward which AI should be applied.)

This calls for a dramatic reconsideration of the “knowledge economy” careers for which our schools continue preparing students. Why educate students for jobs that won’t exist? Perhaps we should place far greater focus on teaching children to be innovative, entrepreneurial creators and strategic managers, as well as to be more nurturing and, well, more fully human.